Nuts & Bolts: Why is there an engine in the middle of that train?

Or, the Dynamic Benefits of Distributed Power.

WASHINGTON, D.C. — If you drive into a city on your way to work, chances are you’ve seen a train running resolutely along the highway. Or you may have had a front row seat at a rail crossing while tons of freight—from consumer goods, to food, to bulk products—get shipped to and from ports, terminals and distribution centers for your purchasing pleasure. Among the colorful boxcars, hoppers, autoracks and reefers, sometimes you’ll see an extra locomotive (i.e. engine) or two.

Do railroads use locomotives to transport… other locomotives? Sometimes, yes, but more often than not, that second or third locomotive is part of a modern rail technological innovation known as distributed power. Distributed Power Units (DPUs), as they are officially referred to, are locomotives that operate in the middle and/or at the end of trains. 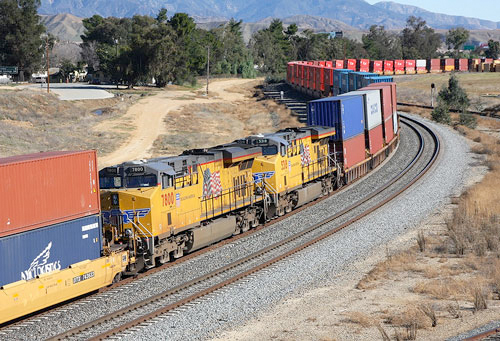 As wireless technologies advanced in the 1960s, freight railroads began adding extra locomotives to the rear of trains to give them enough power to climb steep hills. This is how distributed power was born. These rear engines, or “remote units,” were controlled via radio communications by the engineer in the “lead unit,” the locomotive at the head of the train.

Always looking to innovate, freight railroads evolved the use of distributed power through sophisticated onboard software and communications technology over the last 20 years. By placing DPUs throughout the train rather than just at the rear—thus distributing power more evenly—railroads were able to enhance a train’s carrying capacity. Computers in both the lead unit and remote units also allow an engineer to coordinate braking and acceleration, as well as redistribute power as they see fit.

The Dynamic Benefits of DPUs: Safety, Efficiency and Sustainability

Now that we understand the origin of distributed power, let’s explore some of its benefits.

Distributed power makes trains more productive by allowing them to haul more. Whereas train length and tonnage were previously limited by physical factors (i.e. the strain on infrastructure and equipment), DPUs mitigate this tension by redistributing power evenly. Reducing the physical force on railcars makes them less likely to derail and protects equipment and infrastructure, bolstering safety. Trains can more safely and efficiently serve customers and consumers thanks to DPUs.

The braking technology needed to stop a multi-thousand-ton freight train, which can take more than a mile to halt, is obviously powerful. DPUs increase the safety and speed of these stops by redistributing where the braking power comes from. So when a braking command is initiated by the lead unit, it’s simultaneously executed at any remote unit(s) throughout the train, making stops quicker and smoother. More even braking also means less wear and tear on tracks, wheels and other components—the foundations of rail safety.

We already know that rail is the most environmentally friendly way to transport freight over land, cutting greenhouse gas emissions 75% over heavy trucks. DPUs augment this benefit by cutting the draft forces along a train and reducing the horsepower required for movement, helping it attain better fuel economy. This savings, according to Union Pacific, ranges from 4-6% depending on the route and topography.

The lesson? Two (or more) locomotives collaborating on a project can save a lot of energy, haul more and boost safe operations if they distribute the work evenly. The next time you see a freight train in your town, remember that the powerful locomotives—whether at the front, middle and/or end—are working together to bring you your goods.